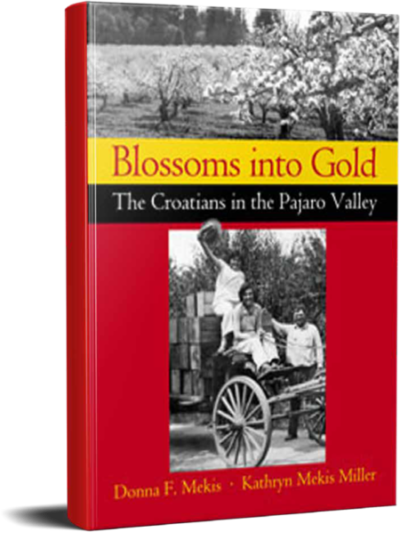 Tour explores history of Croatians in the Pajaro Valley

Story Makes its Way Across the Ocean

“These people lost their families, their parents, grandparents to Watsonville. This is the story of what happened to their families,” Mekis said Tuesday while talking about the trip and showing photos at her home in Santa Cruz. “This is all very fresh and new to them. They are just oming out of being a part of the former Yugoslavia, so anything that they can say is theirs, ‘this is what we did,’ is important to

“Tales of the Apple People of P.V.”

“I have been captivated by Blossoms Into Gold by Donna F. Mekis and Kathryn Mekis Miller....The true story of the Croatians in the Pajaro Valley.”

“Blossoms Into Gold, the product of the sisters’ long research, tells…[many] stories…shedding light on a long-overlooked part of local history. But both authors say they hope it will go even further….” ‘One of the things we’ve said is we want this to be a bridge. The more every group understands about other people they are living with…the different waves of immigration…the better off we’ll be.’”

“A compelling historical book…. The sisters have done a beautiful job turning this rich history into an equally rich text. While the book is historical in nature, it doesn’t read like a classroom textbook, rather it feels like a portrait through time.”

“It is an amazing story, and the two sisters have told it brilliantly.”